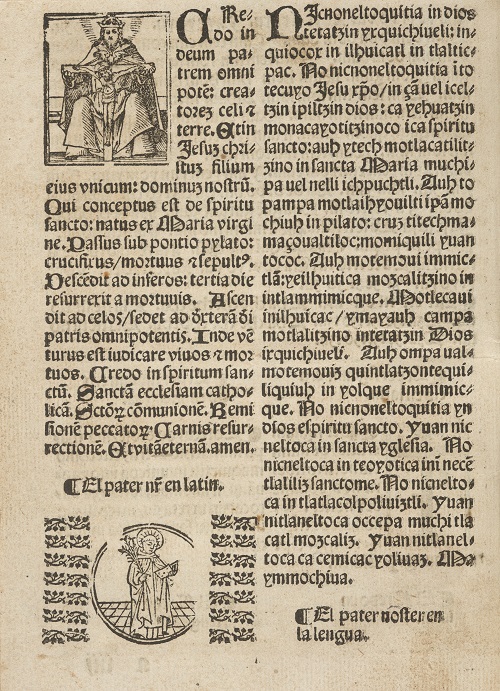 The Huntington Library holds a number of Mexican imprints printed before 1900 which contain Indigenous languages. The language most extensively covered in the library's holdings is Nahuatl; also found are works in Otomi, Zapotec, Huastec, and Rarámuri (Tarahumara).

The library's rich holdings consist of religious treatises, linguistic studies and sometimes combinations of both. These imprints come from both colonial Mexico (New Spain) and post-independence Mexico from 1821 to 1900.

These works containing Indigenous languages were created by members of religious orders of the 16th and 17th centuries in Mexico; the library holds the studies of such scholars as Horacio Carochi, S.J.; Alonso de Molina, O.F.M.; and Juan de Cordoba, O.P. For post-1821 Mexico, the library holds the two major linguistic studies of Faustino Galicia Chimalpopoca (1805?-1877), a major scholar in 19th-century Mexican studies of Indigenous languages.

These linguistic studies, catechisms and doctrinal works served as tools of cultural assimilation. In recent years, these texts have been repurposed for Indigenous language revitalization projects aiming to recover premodern Indigenous voices obscured by European colonization.

Explore Indigenous language resources beyond The Huntington's collections via our Additional Resources page.

Searching for Materials in the Library Catalog

The library catalog is useful for discovering further bibliographical information on the works in this guide, as well as for locating post-1900 scholarship on, and editions of, Indigenous language studies of Mexico.

To discover works relating to a specific Indigenous language, it is helpful to search the library catalog by subject and/or keyword. Results can be refined by using the "Modify Search" feature to specify material type, date and other criteria. Below are some sample subject searches that illustrate this process:

To search the library catalog by keyword, select "Keyword" from the drop-down menu, enter the search terms in the search box and click "Submit."

Use the search tips above to search the library catalog for works containing Indigenous languages not covered in this guide.